When you’re three, each day is filled with extreme heartbreaking, melt down inducing, world ending drama.

…put their basket in the spot I wanted.

…put away the toy I wanted to put away.

…said I couldn’t have this stick in the park.

…hugged me too tight.

…said I was Japanese (not even joking).

Literally, world ending stuff right there. Each day is full of what you and I would consider to be nothing more than very minor inconveniences for the most part. Except someone calling my drawings not beautiful, them’s are fightin’ words!

This afternoon one of the kiddos came running up to me after toilet time with tears in her eyes, and told me that the knob on the faucet was loose. Except she didn’t say any of those words because she did know what it was called in English (and I doubt she exactly knew what it was called in Japanese either). Her words were something to the effect of, “Teacher Allison! Teacher Allison! When wash your hands, the water on go like this almost broken!” Coupe that with the imagine a three year old miming turning a faucet knob. Surprisingly, between her motions and my ever expanding ‘three year old Japanese preschooler who’s also learning English’ vocabulary fluency, it wasn’t that difficult to decipher her meaning; a loose knob.

I asked her if she broke it, jokingly of course, but the joke was lost on her and I could see the tears building, threatening to fall. “How dare you accuse me of breaking school property Teacher Allison!?” Is probably what she would’ve said if she had the vocabulary for it. Instead she vigorously shook her head no, pointed aggressively to the bathroom one more time, and then walked away to go play with the foam blocks. Crisis averted? Problem solved? Who knows… But her part was done when she conveyed the message. And thinking back on it now, I never actually got up to go check on the issue that caused her such distress., pretty sure another crisis came up that I got sidetracked by… Whoops.

Having only walked the Earth for a little less than 1500 days, some of my friends’ pets have more life experience than those munchkins. And because of that, each dilemma seems to be automatically rocketed up to Defcon 1, probably due to the fact that they just don’t have much else to compare it to. If someone stole my spot on the bus I’d sit behind them and kick the back of their seat the entire trip (kidding! Mostly…) but my munchkins don’t know to do that. Sure, some of them have surprisingly creative and malicious retorts to their classmates, but it’s still small beans in the grand scheme of things. And even then, they have about a five minute attention span, so whatever crisis they were just dealing with, will be forgotten in a matter of minutes. A new toy gets placed down in front of them, a classmate finds a bug, teacher Allison drops something, someone knocks a block tower over, etc, and all sour feelings evaporate. Magic. That part is a blessing and a curse I’m realizing…

Maybe that’s the thing though, isn’t it? Having a short attention span for certain things. Sure, later in life sometimes we’re stuck between a rock and a hard place where we have to decide between the lesser of two evils, but so far we’re all still here. Maybe I have to watch how the little monsters are able to forgive their classmates so quickly and to just go back to playing like nothing happened. It sounds nice and simple, but we know better. We know the power of a grudge. And sometimes those things just don’t let up without some good soul searching and council from your own personal board of trusted advisors – i.e. your bff’s.

I know I’ve had my share of “loose knob” catastrophes, where it seems the world is ending. I’d like to think they don’t happen as frequently, but I’m sure my Dad would disagree. Some things are just instant crisis mode. “We’re out of chocolate chips and brown sugar? How can this be? How are we going to survive? I still have three more batches to bake!!” Are probably words I said over my 48 hours baking marathon this past Christmas… But seriously, it’s a panic inducing few hours or days, then your personal world eventually goes back to normal, or it adjusts to a new normal.

Taking things with a grain of salt is going to try to be my mantra this month. I’ve gotten my wrist slapped a few times here for this and that, and I can’t let those moments take up long term residence in my psyche. It’s getting crowded up there. But also if the other party seemed to let it go after the initial reaction, then why shouldn’t I do the same? Accept it, deal with it, and then move on. Different situation than a classmate taking my seat at the lunch table, but instead of me sitting at a different table completely, maybe I just have to learn how to sit across from them and be at peace with that. (But a little part of me would much rather just start getting to the lunch table earlier and taking that seat first).

Well, now it’s getting late and my metaphors are getting all sorts of convoluted, so I think it’s bed time. This was a lot of rambling but I hope there’s a point to it somewhere. I promise had a point when I sat down to write this… Oh well, I suppose my biggest take away from this is that it’s interesting watching three year olds deal with their own catastrophes with the life experience they possess. It’s innocent and darn funny sometimes.

4 thoughts on “What I learned in preschool: the drama of preschoolers” 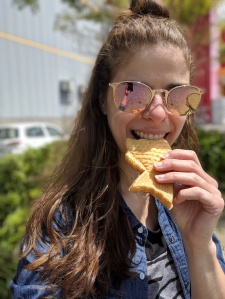